Besides movie trailers, nothing makes me more pumped about seeing a new movie more than a bad-ass POSTER.  I remember back to my childhood and teen years when I used to go to the local rental store and spend hours looking through all the horror VHS covers, which were based after that film’s movie poster.  Back in the day, before the internet, the cover of a movie and the brief description and pictures on the back used to be the only way to make the decision on which movie was worth renting.  In memory of the now defunct video stores, such as Blockbuster and Hollywood Video as well as the various mom-and-pop  stores, here are Dr. Morbid’s Top 10 Movie Posters of 2013.

Not exactly a horror movie, so it’s an honorable mention.  Godzilla’s new look still kept mysterious, but his iconic image is formed out of the collapsed buildings.  Very clever.

A zombie movie without a zombie to be seen on the poster.  Kudos.

9. The Birth of the Living Dead

Throwback art design reminiscent of Dawn of the Dead’s poster, but a sun replaces the zombie’s head.  The poster is a loving celebration of George A. Romero’s zombie classic, just like the documentary itself.

A beautiful looking poster that shows the duality of an intoxicatingly seductive, but deadly female vampire. 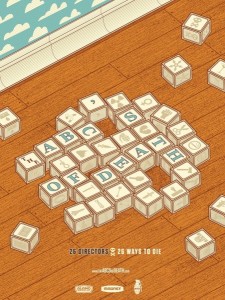 A very clever play on the words and design of a children’s set of alphabet building blocks that spells out the film’s title and forms the look of a skull.  Extra points for simplicity and originality.

A VHS-era poster that displays the title’s ridiculous concept perfectly.  If this cover was at a local video store, I would definitely contemplate renting it.

A creative poster that combines the look of the creepy mask worn by the killer and a detailed map of the interior of the house.  The design manages to be both simple and complex at the same time.

This poster makes Bigfoot scary again.  This isn’t Harry and the Hendersons.

This neon-nightmare mimics the film’s cinematography, which is like the horror equivalent of Nicolas Winding Refn’s Drive.

Amazing artwork sets this poster apart from the rest of the pack, with eye-catching colors and an intriguing old-school 80’s design.

Simplicity always wins when it comes to making a memorable poster.  The iconic Mickey Mouse’s hand covered  in blood and reaching out, as if coming out of the grave, is  simple yet amazingly memorable.  Add in an eye-catching yellow background that draws the viewer in, as well as using a font that mimics Disney’s whimsical style, and you’ve got a perfect image.  Check this film out, it’s definitely unique.

Any Posters from 2013 that I overlooked?  Feel free to message me below.